The second day of the symposium began with a keynote lecture from Katie Hinde Ph.D., (pictured, right) an Assistant Professor of Human Evolutionary Biology at Harvard University. Dr. Hinde spoke on “Boy Milk & Girl Milk: Evolutionary Insights,” and drew from research that she undertook as a postdoctoral researcher at UC Davis, and as part of the Foods for Health Institute.

Dr. Hinde’s presentation approached the study of milk from an evolutionary biological lens. Milk is a great evolutionary compromise and the forces of natural selection act on mammalian milk. In her study of rhesus macaques, Hinde discovered that during stages in her reproductive career, a monkey mother is making a decision about allocating biological resources towards lactation; there is a trade-off between investment in their own health and the health of their offspring. Dr. Hinde’s research examines the quality of breast milk across a mother’s reproductive career, and found that mothers produce different qualities of milk depending on the sex of their baby and on where that birth falls in the timeline of their reproductive life. Dr. Hinde studied the pressure of natural selection on mothers and their milk, and concluded that calcium-rich milk accelerated the development of daughters (to mature and reproduce early) and high-fat-concentration milk increased the body mass of sons (to improve physical growth). These sex-specific differences were found in the yield, fat and mineral concentrations, protein levels, and hormones delivered in the mother’s milk.

In studying the phenomenon of different milks in rhesus macaques, Dr. Hinde worked with Gail Carpenter and Barry Bradford at Kansas State University and came to similar conclusions for cows.  They found that cows produce significantly more milk after they gestated a daughter, and cows that had a daughter in their first pregnancy produced more milk for the second pregnancy, even if that second infant was male. This has significant potential for the dairy industry since the sex of the first child continues to effect the milk production of the cow mother over the course of her lifetime.

Dr. Hinde concluded her presentation with a fascinating look at the behavioral consequences of sex-different milk. She found that not only are mothers producing nutritionally-different milk for their offspring, but that milk also contains different cortisol concentrations that produce negative social effects for their daughters (like nervousness and fearfulness) and positive social effects for their sons (like playfulness and curiosity). The production of cortisol was linked to the mother's lower parity, or her social ranking within the community. This finding opens up new and exciting opportunities to study the relationship between nutritional and social outcomes as a result of different milk qualities. 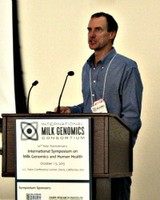 The second keynote address of the morning featured Russ Hovey Ph.D., a Professor in the Department of Animal Science at UC Davis (pictured, left). Dr. Hovey is currently pursuing pig models for the study of human lactation and mammary development and focusing on the protein prolactin to potentially help women who struggle with insufficient milk supply. Prolactin, in concert with estrogen, is a key determinant of mammary development, and the complex mammary epithelial tissues are very similar in pigs and humans. Dr. Hovey’s work calls for a need to understand what is happening at the level of tissue, and a need for continued models and genetic manipulation in order to build our knowledge of the development and function of the mammary gland.In his talk, “Modifying Mammary Gland Function, Then, Now, and in the Future,” Dr. Hovey spoke on his lab’s research into the development and function of the bovine mammary gland. Dr. Hovey explained that the mammary glands have specific windows of developmental sensitivity and plasticity that can be manipulated through a variety of approaches, including dietary intervention and genetic selection.

After a short break, the symposium reconvened for a trio of presentations from Nurit Argov-Argaman, Ph.D., Klaus Lehnert, Ph.D., and doctoral student Daylan Tzompa-Sosa, addressing the manipulation of bovine milk fat. Dr. Nurit Argov-Argaman is from the Department of Animal Sciences in the Robert H. Smith Faculty of Agriculture, Food & Environment at the Hebrew University of Jerusalem in Israel.  Her invited lecture, “Metabolic Regulation of Bovine Milk Fat Globule Size,” focused on this unique feature of milk fat and explained why it is important to understand the regulatory function of the milk fat globule size.

Dr. Argov-Argaman points out that while many health-related studies have focused on connections between dairy fats and poor health conditions such as obesity and diabetes, there is much work to be done in accounting for the diversity of lipid species found in milk, including polar lipids, which are shown to exert beneficial metabolic effects in vitro. Milk fats are secreted in a complex molecule and structure, forming the milk fat globule – it is a complex structure that is part of a complex process. Understanding how milk fat globule size distribution is regulated at the level of the mammary gland is critical to modulate and improve bovine milk fat composition and increase levels of beneficial polar lipids in milk and dairy products. Dr. Argov-Argaman contends that if we can control milk fatty acids, we can improve the nutritional qualities of milk by changing the composition of the milk fat globule. 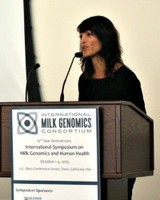 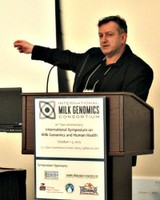 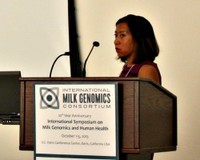 Dr. Argov-Argaman, Dr. Lehnert, and Tzompa-Sosa
The next speaker was Dr. Klaus Lehnert, an Associate Professor of Biological Sciences at the University of Auckland, New Zealand; his presentation was titled, “Extremes in Diverse Natural Populations: A Phenotypic Population Screen Discovers a de Novo Mutation for Unsaturated Milk Fat.” Dr. Lehnert and his colleagues set out to challenge the hypothesis that, in animal breeding, the new mutations responsible for desirable phenotypes can be identified and included in breeding and selection strategies. By screening and analyzing the fat and protein composition of milk from several million animals in New Zealand, Dr. Lehnert and his colleagues discovered a rich collection of genetic diversity and phenotypic variation. They then selected an animal that produced high volumes of milk with reduced saturated fat content and performed selective breeding to pass on this desirable genetic mutation.

The last speaker on bovine milk fat was the recipient of a student travel award, Daylan Tzompa-Sosa, a Ph.D. student in the Dairy Science group at Wageningen University in the Netherlands, who spoke on “Regiospecific Analysis of Bovine Milk Fat Triacylglycerols: Variability Within a Dairy-Cattle Population."

Participants reconvened after lunch and the second day of the International Milk Genomics Consortium’s 10th annual symposium continued with a series of talks on genetic selection for economically important traits in milk. Juan Medrano, Ph.D., Professor of Animal Genomics in the Department of Animal Sciences at UC Davis, delivered the segment keynote on “RNA Sequencing for the Analysis of Complex Traits in Milk.” Then Tom Wheeler, Ph.D. a senior scientist at AgResearch in the Ruakura Research Centre in New Zealand followed with a presentation on “Transcobalamin in Cows’ Milk Facilitates Uptake of Vitamin B12 into Human Intestinal Epithelial Cells.” Lastly, Marleen Visker, Ph.D., from the Animal Breeding and Genomics Centre at Wageningen University in the Netherlands, delivered her presentation, “Reducing Methane Emission by Dairy Cows through Genetic Selection.” 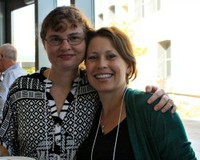 The day ended with an industry discussion led by Johan van Arendonk, Ph.D., Director of the Animal Breeding and Genomics Centre in Wageningen University in the Netherlands, geared towards bringing genetic trait selection into practice in the dairy industry. Dairy industry professionals like Mark and Blaine McAfee found the industry discussion, and the larger IMGC conference, to be an excellent opportunity to learn cutting-edge milk science and foster collaborations for the future. The McAfees are the owners and operators of Organic Pastures raw-milk dairy, farm, and creamery outside of Fresno, CA.

The second full day of the International Milk Genomics Consortium conference ended with an engaging reminder of the purpose of the IMGC: to provide a collaborative and interactive platform for the scientific community and industry to accelerate the understanding of mammalian milk genomics and translate that knowledge into usable commercial benefits for industry.